A Brief History of Waldringfield 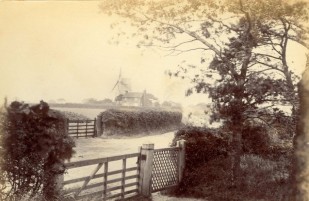 IN 1850 Waldringfield was but a small insignificant village, with a few scattered houses and some 140 inhabitants. With the exception of the old Rectory, now known as River's Hall, and a few farm houses, the cottages generally were small and with little windows peeping out from under the eaves. On the top of the hill stood the Church and Buttrum's old windmill, distinctive landmarks for miles around. At the foot of the hill, overlooking the river was the Bush Inn. On the opposite side of the road was the little brewery, Cliff House, now The Old Maltings, which in the 1890's belonged to John Hill, who grew his own barley and brewed his own beer, selling it at a shilling a gallon. Further away on the heath was the Chapel, the meeting place of strict Baptists from the surrounding district. 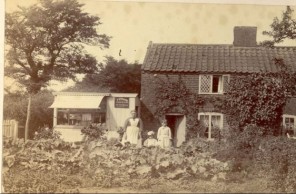 Having its own farms, gardens, shop, inn and craftsmen Waldringfield in those far off days was almost self-supporting. Only occasionally did anyone, even the parson, venture as far a field as Ipswich or Woodbridge, which were said to be a "long way orf." The roads were full of holes and ruts, slushy in winter and dusty in summer. Should they be ice-bound or flooded, then the only way out was by the Deben, where a local boatman was always glad to earn a shilling. The carrier brought in vital necessities, such as groceries and clothing, and even he did not venture out when the roads were icy, unless his pony's shoes were "roughed". 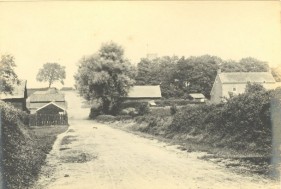 Most men worked on the farms, whilst a few were employed as gardeners and coachmen at the bigger houses. Not many women went out to work, being far too busy at home.

Young women, however, occasionally went out to work in the fields, stone picking, haymaking and gleaning. As for the children, boys did the bird-scaring, singling beet and tending hogs and sheep, whilst the girls, barely in their teens, were usually employed as maids by the local gentry, with whom they often stayed till they were married. There was no village school in Waldringfield a hundred and fifty years ago. 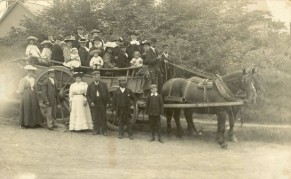 Very little time was given up to leisure and entertainment in Waldringfield during those mid-Victorian days. Like country folks in general, they were quite happy at work. Their most exciting events of the year were the summer outings to the sea-side or Ipswich in newly painted wagons, drawn by magnificent Suffolk Punches and crowded with men, women and children all dressed in their Sunday best ambling along the pretty country lanes. 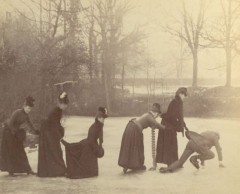 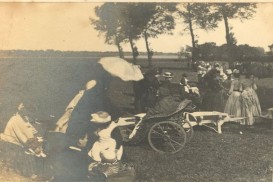 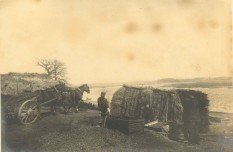 The village's history is industrial. From about 1860 to 1895, coprolite was being dug out from pits in the fields, washed and sifted on the beach and shipped by barge to be processed in factories in Ipswich, as part of the early fertiliser industry. Towards the end of the 19th century Mason's cement-making industry sprang up, using mud from the river mixed with chalk brought in by barge from the Medway. 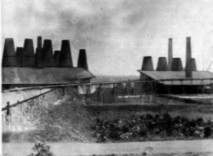 Served by one hundred barges a month and employing twelve ‘bottleneck' kilns, the industry survived until 1907.

The demolition of the factory lasted from 1907 to 1912, the work being carried out by Arthur Quantril, assisted by Terri­torial units, who were responsible for the blasting. Those were exciting days in the village when the chimneys and kilns were filled and the pier taken down. 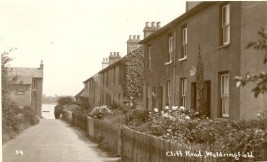 As the kilns were demolished in 1912 the most noticeable reminder of the industry is the row of ‘cement' cottages in Cliff Road, so called because they were built to house the cement workers and the moon on the topsails of the barges operating from Mason's Works at Waldringfield which gave rise to the well-known Blue Circle symbol of the Mason's Works at Claydon. 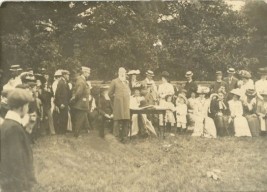 By 1912 Waldringfield had again settled down to its former pastoral life, with the Regatta, Flower Show and Sunday school outings being the main events of the year. 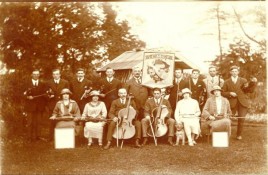 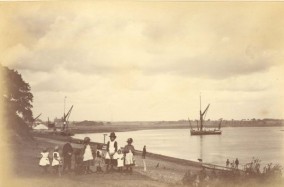 During the latter years of the 19th century Waldringfield anchorage accommodated a fleet of Thames barges, snows, billyboys, ketches and schooners, awaiting their turn to land or unload at the quay and pier for the Cement Works, or the pilot to take them up to Woodbridge. Some barges unloaded their cargoes of London manure, bricks or timber on the beach, taking away coprolite, hay, or straw. It was quite common in those days to see a dozen, of those picturesque vessels peacefully at anchor at the Waldringfield Reach. When the wind blew from the north, clouds, of dirty brown smoke from the Cement Factory enveloped the beach, making it almost untenable. Visitors in those days were few, and yachts were practically unknown. Woodbridge was then, the recognized centre far yachts and pleasure boats. Waldringfield was but a small agricultural and industrial community, giving little time, or thought to the beauties and attractions of the Deben. Waldringfield during the early twenties showed definite signs of development. New houses sprung up alongside the main road leading down to the river and near the quay. Each successive year saw an increase of boats and yachts on the river. Little huts were erected in all sorts of nooks and corners along the cliff-side In the spring of 1921 a meeting was held in "Gorse Cabin" close to the site of the present Club House, which was attended by eleven enthusiastic sailors. In this humble manner the Waldringfield Sailing Club was born . The first President was the late Sir Clifford Patterson, the Chairman Mr. A. W. Stollery and the Secretary Mr. H. Nunn, who a few months earlier had started the business of Nunn Bros., boat builders, in a small building on the quay, near the old coal shed.
The Treasurer was T. N. Waller, Esq., of "Novacastria."
A piece of yellow and blue bunting happened to be lying an the table, and when the question of the club burgee arose, someone saw this bunting, picked it up and said, “This will do." It was promptly adopted as the club's Official colours, and has remained so ever since. 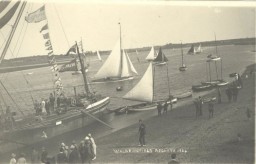 By 1930 the membership of the club had risen to 30, but it was still very much a village affair. On the 16th of May 1932 the old Club House was opened the first of its kind on the river. In 1937 the club was affiliated to the Yacht Racing Association, and the Fairway Committee was established under the jurisdiction of the Club to regulate the foreshore and anchorage. From that time until the second World War membership gradually increased, the club becoming less and less a village affair, gradually passing into the hands of yachtsmen, who made Wald­ringfield their headquarters.

Just as Waldringfield was getting into its stride World War II broke out, when that peaceful little beach was converted into a front line of defence, barricaded with barbed wire and sinister looking iron spikes. Boats and yachts were laid aside, their owners generally leaving for the Forces, where their knowledge of winds, sails and tides stood them in good stead. For the duration of the war the beach and slipways were taken over by the Navy who, besides barricading the foreshore, constructed a "dummy 'fleet" out of iron poles and painted canvas.

When lit up at night this "fleet" was quite impressive, and could be seen for miles around. From all accounts it served a useful purpose, giving the enemy a false impression of our naval strength in East Anglian waters and the actual intentions of the High Command. For six years the war put an end to the club's activities. The Royal Navy patrolled the river, while the majority of the club members were employed on war service. 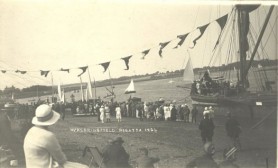 Today, the river is given over to leisure. Waldringfield Sailing Club, formed in 1921, now has a membership of 650 of whom around 80 live in the village. In addition to providing club dinghy racing, the WSC hosts open meetings, runs training courses and plays a prominent role in the annual Deben Week Regatta. The Maybush was originally an old farmhouse. Like most inns in, the Deben area, it was most probably licensed round about 1745. According to Isaac Johnson's map of 1825 it was first known as the Cliff Inn. Later it was called "The Bush." (See White's Suffolk Directory of 1844).

It was during the last twenty years of the 19th century that the Maybush had some of its most exciting days. That was the time when coproliters, cement workers and bargemen were the inn's chief patrons. The busiest time was at eleven o'clock in the morning, when dusty throated workmen crowded the taproom, where they always found some three dozen pints of beer standing ready for them on the table. 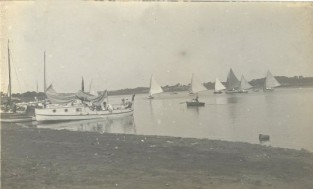 The most hectic time at the Maybush during the nineties was at the weekends when, in addition to local patrons, visitors came over from Kirton and Newbourn far a game of quoits or skittles and of course, a booze. Those lively meetings usually finished in furious arguments and a fight in the back­yard.

Waldringfield beach became a tourist attraction after the industrial period came to an end, from the early to mid twentieth century onwards and has become more popular ever since.